Early hours. It was barely light. I hadn’t been able to sleep, partly from the excitement of knowing how close we finally were to making landfall in Fatu Hiva, one of the Marquesas Islands (Îles des Marquises, French Polynesia), and partly because we had finally found some wind and were flying along, broadside to the swell. The cockpit was soaked and salty from the squalls and the spray but I was perched on the bench on the leeward side, knees huddled to my chest, Tilley hat pulled forward, lifejacket on, clipped on, pruny fingers holding on to the sprayhood, eyes straining to make out land in the faint light of the dawn. It crossed my mind more than once that perhaps the chart plotter was all wrong and that we were nowhere near land because, even at 25 miles away, and knowing that the islands are quite high, I was puzzled that I couldn’t seem to see anything other than thick rain clouds ahead. I realised after a while that what looked like a squall was in fact a jagged land mass, with the top obscured by big white clouds. The steeply sloping profile of the end of the island was finally clearly identifiable, and unmistakable 7.40am Land Ahoy!
The next few hours passed uncomfortably and more slowly than we wished. Dietmar and I had a stupid argument about something that had happened earlier. We also worried about whether the anchorage would still be full of the Oyster World Rally fleet and whether, after all this way, there would be room for us. The sea was uncomfortable with the wind on our quarter and a big swell. We were both really tired and really ready to stop. I sat outside and Dietmar stayed inside and tried and failed for a long time to get an email connection via SSB. We were wishing the time away.
As we came closer to the island, we could start to make out the landscape. Perfectly triangular crested ridges that ran from the peaks to the sea, swathed in what looked like velvet in a hundred shades of green. The occasional tree and sometimes a lush valley of fluorescent green. Where the peaks met the sea, black volcanic rock staunchly met the 3,000 mile fetch of the Pacific Ocean and seawater exploded into fountains of white spray and mist at the foot of the cliffs. Seabirds wheeled over us.
We dropped the mainsail in anticipation of an acceleration zone around the end of the island and swapped the genoa for the jib. We were still doing 5 knots. We set a course that avoided the ‘Uncharted waters’ part of the chart and after a short while could see from a distance other yachts, like neatly arranged Dinky Toys, anchored in a line in Hanavave Bay, or la Baie des Vierges, our destination. The closer we got, the lusher the island appeared. Forests of palm trees, bushes and trees and grasses in every possible shade from citrine to emerald. As we came around the headland, the scent of flowers and foliage carried on the wind to our boat from the blue wilderness. After 22 days at sea where the only smells are food and bodies, the effect was mesmerising. I leaned closer and breathed in lung-fuls of green. 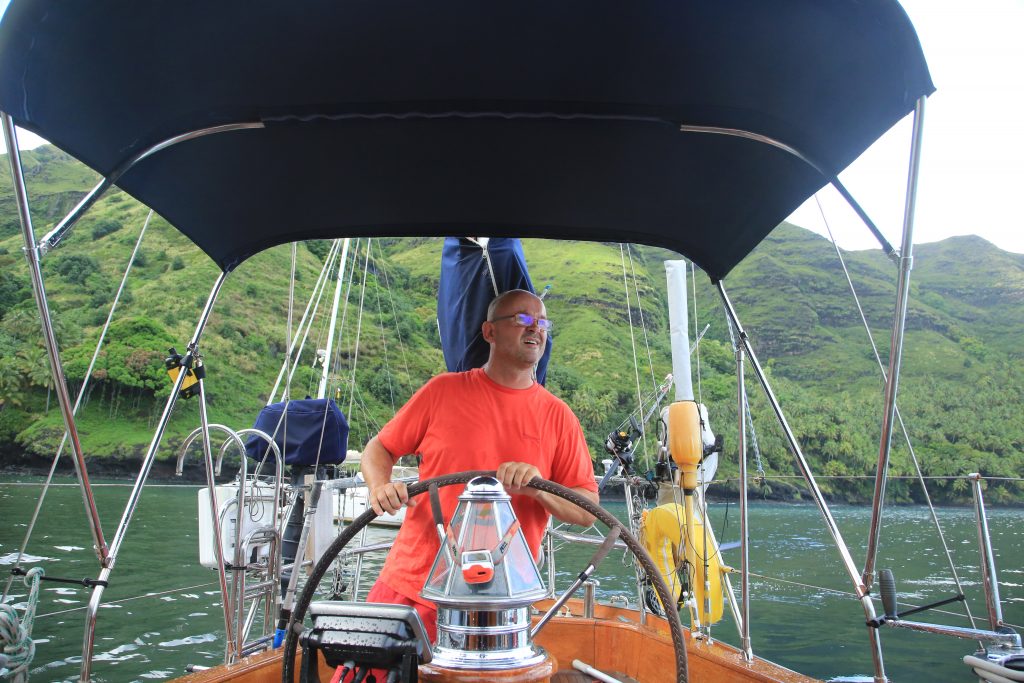 Once into the wind shadow, we started the engine and furled the jib. We crept at 3kts past fishing floats and miscellaneous flotsam in the water. The depth gauge, which had only shown us our last depth in Galapagos for the last 22 days, still wasn’t giving us a reading but finally sprang into life. 42 metres. Good. We pootled further in and began to take in the majesty of our extraordinary surroundings. It sounds like such a cliché, but it really felt like sailing into paradise. Steep cliffs covered in luxuriant vegetation hanging from every cranny and roothold. Birds of paradise and frigate birds circling. Gigantic dark volcanic rocks in strange phallic formations (the original name for this bay was Bay of Penises but the puritanical European settlers put paid to that and renamed it Bay of Virgins. Go figure.) The scent of a million million moist leaves and grasses. Assorted white yachts bobbing gently in a very light swell. The sound of a hundred waterfalls cascading into the bay. Our shoulders began to drop and we smiled at each other for the first time in about 8 hours. And breeeathe 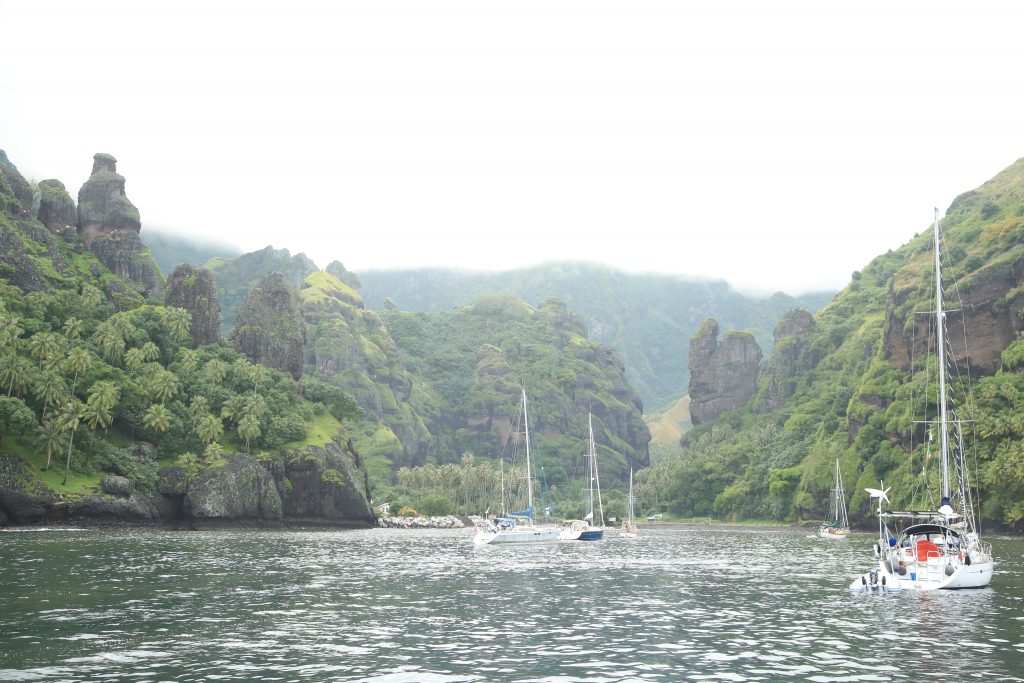 We still had to anchor, and the bay shelves steeply. We dropped the heavy Rocna anchor at 12.50pm in 27 metres of water (!), let out almost all our chain and said a quiet prayer. Please hold. Our guardian angels were obviously listening and the anchor held fast, even with 2,000rpm backwards. Holy cow, we’d arrived. 3,037nm and an hour over 22 days at sea. The longest, and hardest, journey either of us had ever undertaken.

The rest of the afternoon passed in a bit of a daze. We drank a beer and tidied the boat and I was sitting on the coachroof, eating crisps and letting my eyes drink in the view, when Ken from SY CODE ZERO dinghied over to us. He had towed our dinghy back to CESARINA in La Playita anchorage in Panama when our outboard overheated and had been excited to see us sail into Fatu Hiva after all this time. He came on board and he and Dietmar drank beer, swapped sailing adventure stories and commiserated for hours about Raymarine problems. Some locals buzzed by in their aluminium dinghy and offered steaks from their large freshly caught tuna which was lying in the belly of the boat, attracting flies. I explained that we already had tuna on board but swapped a beer for a grapefruit. Dietmar raised an eyebrow at me giving away a precious beer, but agreed that the grapefruit was probably worth it. As the sun set, Ken returned to his wife on board and I went below to prepare supper. We had been too lazy and too distracted to inflate the dinghy and go ashore but we had tuna left from Dietmar’s catch 2 days before so I cooked the remaining potatoes and onions and made a coconut sauce. We ate in the cockpit, lit by a single gentle solar light and listened to the rhythmic singing and drumming of the islanders on the shore, only 150m away.

For the first time in three weeks, we climbed into bed together, and were both asleep before our heads touched the pillow. I woke at 3am to the sound of rain hammering on the coachroof and the wind whistling through the rig. I was disorientated for a second, couldn’t understand why Dietmar was in bed next to me and wondered if I was meant to be on watch I had caught up with reality by the time I had climbed out of the berth and my second thought was to check whether the anchor was holding. The phone we had set the anchor watch app on had gone flat but all looked absolutely fine outside, despite the fierce winds funnelling through the bay and the rain like stair rods. I stood for a while to watch the rain and smell the air before once more clambering back into the bunk, snuggling up to my sleeping Captain and going straight back to sleep. Paradise found.