From an outsider’s perspective, what is about to happen on Cesarina loo 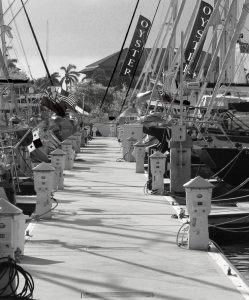 ks pretty crazy. For starters, the Captain and his new crewmate have only known each other for slightly more than five minutes in the grand scheme of things. Secondly, most of the new crew’s sailing experience has been on large, sophisticated catamarans (where manual winches are the exception, not the rule!). Thirdly, although the Captain has plenty of experience with Cesarina, his new crewmate has now been on board for 12 days and has been untied from the safety of the marina for a mere 52 hours. And yet, Cesarina is about to embark on one of her biggest challenges to date – the Panama Canal transit – and then her longest passage ever – straight across the Pacific, bypassing the Galapágos, directly to the Marquesas (Îles Marquises). No mean feat for an experienced crew, never mind a new couple with different mother tongues who have only known each other 8 weeks. Argh.

Still, nothing ventured, nothing gained, as they say.

On land, we’ve had interesting times here together already.

The marina butts up against Fort Sherman, the old US airforce base.

We ventured in at 6am one morning to shoot some photos. It looks deserted but it seems that the Panamanian Naval Airforce still use it to train cadets, so it feels a little like a film set, just waiting for Oliver Stone.

Right on the edge of Shelter Bay, with a view across to the ocean and the Canal approach on one side, and otherwise surrounded by the encroaching jungle, the base feels abandoned, despite the pockets of activity .

The runway is sprouting grass but nonetheless we have seen ancient camo-painted planes landing and taking off and we hear the whoomp-whoomp of military choppers over the marina most days. That morning, we smiled at the stern-looking uniformed drivers of military trucks who drove past us slowly several times. Dietmar’s bright blue shirt and orange shoes presumably reassured them that we were not engaged in military espionage.

We even had an adventure when we went provisioning; we grabbed a ride with the marina bus to the Rey supermarket in Colon (the route was really interesting and took us over the top of one of the Canal locks and along the banks of Gatun Lake).

Three hours and four supermarket trolleys after our arrival, we’d missed the marina bus back but spent so much money that we were entitled to have our shopping bags delivered back to the marina by the supermarket.

The delivery driver offered to give us a lift back as well and we accepted, naively and gratefully. The journey was pretty surreal; the driver kindly stopped outside a tackle shop so that Dietmar could buy some more fishing line. Dietmar said he’d be five minutes so I stayed in the van, buckled into the middle seat, next to the driver. No air-conditioning. There was obviously a lot to look at in the shop, so I twiddled my thumbs for a bit and the driver… well, the driver whiled away the time looking at porn on his phone. To be fair, he did attempt to conceal from me the various quivering asses and I then did my best to distract myself with an expensive internet connection, but I was very, very happy when Dietmar returned to the van. I can only assume that the driver was keen to be alone as fast as possible because we then had the ride of our lives on the way back to the marina. There we are, in the Panamanian equivalent of the Ocado delivery van (albeit a lot more battered), doing 70mph on unmade, gravelled roads and swerving at high speed to avoid potholes and oncoming vehicles, to a very loud soundtrack of local R&B. It was like being onboard on a hot lap of a rally circuit, but in a transit van driven by a sexually frustrated bloke in the middle of a midlife crisis.

On the boat, we had adventures before we even slipped the lines. Needless to say, Cesarina is a completely different proposition to the big catamarans of my previous life. She has a number of idiosyncrasies that are completely foreign to me. Let me tell you, for example, about the loo. To flush, first you have to open the water inlet tap, which opens the pipe to the sea, allowing an uninhibited flow of seawater in, with which to flush the loo (yes, I thought that too…). Then, depending on the pressure, you have to use a different contraption, like a t-shaped chrome handle that you pump up and down, to squirt said seawater into the bowl. Then there is a pump handle, much like an old-fashioned water pump that you might find in a village square these days, that you also have to pump vigorously up and down, this time to evacuate the bowl. I thought it was going to be the winches that would give me well-defined triceps, but perhaps not. Anyway, this whole process needs to be repeated three times for each time you… you get the idea. When explaining this to me, Dietmar was very keen to point out that it was super important to turn the water inlet tap OFF, otherwise the boat could fill with water and sink.

And then I forgot.

Neither of us realised for a while. We even heard the bilge pump running over and over again and didn’t put two and two together until I mentioned that I could hear water running… Dietmar went to investigate and then was extremely calm as he mopped the flooded head (bathroom)… We didn’t sink, but needless to say, I haven’t failed to check since!

The rest of Cesarina’s outfitting is a glorious mix of traditional seafaring kit, closely accompanied by the latest technology. There are however no wooden blocks or hemp lines (thank goodness). Most of the winches are manual but some are electric. Inside, the interior is gloriously old-fashioned. Aside from the above-mentioned loo, there are two sets of watch bells that ring every half hour, the foghorn is brass and looks like a coaching horn – and would double usefully as a cosh in the event of emergency – and there are glass prisms set into the ceiling which act very effectively like lights. All the fixtures and fittings are made beautifully from solid mahogany and the only painted surface is the ceiling. But, tastefully incorporated alongside this vintage loveliness is also the latest technology: all LED lights (in traditional fittings) and a full new set of the latest Raymarine kit, not to mention the vast array of clever little bits of kit that Dietmar has squirreled away over the past three years. It’s a perfect mix of old and new, and I am already in love. That might of course be due to the scale of everything – that many whacks on the head from low ceilings and anyone would feel a bit funny in the head… 😉

So much has happened in such a short space of time, it seems. 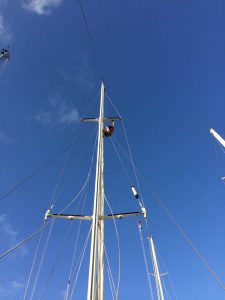 I’ve been up the mast for the first time in my life – this was a significant personal challenge for me and I am happy to say that I smashed it! I’ve also, somewhat more mundanely, tidied, labelled and restowed the contents of almost every locker; mended one of the sun shades by hand with patches of leather; negotiated a seemingly impossible FedEx delivery, and talked Dietmar out of murdering the feckless Raymarine engineer. Dietmar, meantime, has not murdered the feckless Raymarine engineer (despite being sorely tempted to do so) but has overseen the fitting of all the new navigation equipment; been extremely patient with his new crewmate; fixed all manner of things; organised the Canal transit; and done all manner of other things before I’ve even been awake. It’s been ridiculously hot (always over 30 degrees during the day and never less than about 27 at night in the marina) and we have both sweated more than either of us thought possible. It’s been like Bikram yoga, but without the yoga. A constant sauna temperature but without the alpine herbs and scantily-clad Germans. Oh, wait…