We eventually slipped the lines in the marina and headed up the coast to Portobello after ten days safely tied up. I have to admit that I was pretty anxious about sailing with Dietmar for the first time.

I was aware that I had some fairly big boots to fill and that my monohull sailing experience had been pretty limited. I had my fingers tightly crossed (and a lot of drugs on standby) to make sure I wasn’t going to get seasick. I just didn’t want to do something stupid (like leave the water inlet tap open…see previous post…) that would damage the boat in any way. As it turned out, we left the marina without incident. We calibrated the new autopilot GPS compass (a process so easy that we were both left wondering whether we had missed something) on the way to the breakwater, and then we were out in the waves and against the current in the massive tanker parking lot just outside Shelter Bay.

This is where the supertankers and container ships park up while waiting for their slot to transit the Panama Canal and for their pilot to come on board. They are mostly about 800 – 1,000 feet long and it’s not always obvious whether or not they are underway. Scything through the swell, CESARINA elegantly slipped her way past all of them and then we tacked upwind to the Bahia de Portobelo. It’s only 17 nautical miles but it took us 6 hours and as many tacks against the wind. Good practice though. I only hove her to accidentally once. She sits very happily with her foresail backed. The captain wasn’t that impressed with my completely unplanned stalling of the boat, but it was a good learning experience for me! Now I know what not to do – or indeed, what to do should I need to!

Our first attempt to anchor did not hold but dragged, muddily, backwards, very slowly. We capitulated after a while and whistled nonchalantly while we took the anchor up, then slunk off to another part of the bay, shamefaced, to try again. This time, Dietmar took the wheel and I dropped the anchor and all was well. Aaah. Time for rum and Coke and breeeaaaattthhe…

The next day started slowly and we pottered about on the boat, 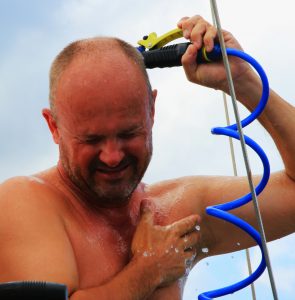 doing little jobs including getting into the water to clean the hull. The current was strong and the water quite fresh but it needed doing. If you’d sat in Shelter Bay Marina for 6 weeks without moving, you’d be growing a beard on your bottom too.

In the middle of the afternoon, we weighed anchor and practiced some manoeuvres. Dietmar wanted me to get the hang of turning CESARINA in her own length, “on the plate.” He made it look so easy… and then it was my turn. The weather, and particularly the wind, was kind to me so it wasn’t as hard as I had feared.

Nonetheless, she is a big girl and I am hoping not to have to take on berthing responsibility any time soon! We then motored out of the bay, past a beautiful classic motor yacht that looks just like the boat in the Virgin Atlantic safety briefing video – the one with the giant crab, you know? – and out to sea where we set the foresail. We sailed for about half an hour before reconsidering whether we really wanted to go back to Shelter Bay, bearing in mind that I would then be responsible for tying her up for the very first time in the pitch black. The marina is not at all well lit. Perhaps not such a good idea.

We turned tail and returned to the bay. I cooked salmon in a sweet soy and maple glaze, with sweet potatoes, broccoli and pan-fried spring onions and we sat talking in the cockpit for a long time with the lights off, looking at the stars overhead.

The following morning we did some boat maintenance checks and then set sail for Shelter Bay. The passage back was busier with big boats than the trip up had been, and I experienced downwind sailing in CESARINA for the first time. My goodness, she is a delight to helm.

With just the foresail out, we were sailing at nearly 7 knots in 12 knots of wind, at 150+ degrees. Glorious! We gybed twice – I followed my captain’s instructions perfectly and together we executed both manoeuvres perfectly. What a joy!

After playing Frogger with a few humungous container ships, we eventually rode the swell back into Shelter Bay and then it was time to prepare the lines for berthing.

I was, I have to confess, really anxious about this. For starters, I had learned to lasso cleats from the boat in my previous life and was never expected to get off to tie up.

Secondly, you, dear reader, may have noticed that CESARINA is very perfectly shiny, with no scratches, and that Dietmar loves her more than anything (or anyone, probably) else in the world.

The stakes were super high. We tied the fenders on as usual and then Dietmar showed me how to prep the lines so that I could leap off the boat (all 5’5” of me. Hmm.) and tie her up quickly to the midship cleat, then run around and secure at least one more line before she hits the pontoon ahead and it’s Game Over for me. In reality, thankfully, CESARINA took pity on me. Looking as sleek and stately as ever, there was quickly a throng of people on the pontoon, keen to take her lines. In a bit of a panic, I then managed to do all the things that Dietmar had asked me not to do – eg, give the forward line to someone before we had tied on the midship spring, fail to give instructions, generally go into headless-chicken-mode – and in the event we narrowly avoided mounting the pontoon forward.

My heart was in my mouth as I went to check, but the old girl hadn’t even kissed the dock. Thank the Lord. I was going to live to sail another day 🙂

Thank you, CESARINA. Dietmar was right – if we look after you, you will look after us.